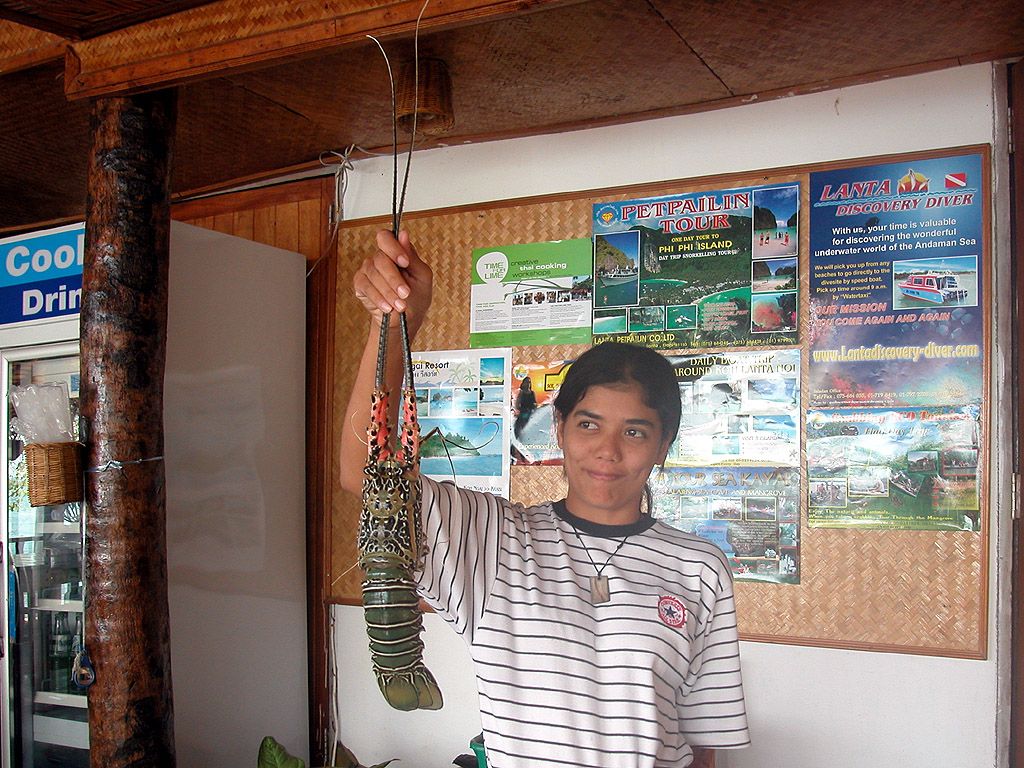 We Saw the Tsunami - Mutual Help

After some days in hectic Bangkok we looked forward to a quiet Christmas with Hanne's brother and his wife in Bamboo Bay Resort on Ko Lanta. And our Christmas was quiet until the tsunami in the Indian Ocean struck the island without prior warning on December 26th around 10:30 am. We were very lucky, and to us the catastrophe became an example of mutual help through dialogue in a group of people rooted in many cultures.

We sat on the porch of Jon and Tove's house, which lies on a mountainside with a beautiful view over the southern bay of the island and its three resorts. "Man, is the water low," Jon suddenly shouted. Shortly after the wave rose like a perhaps five meter high arched wall. The front was white like milk and the back green like jade.

It was an impressive sight, which made some of us reach for our cameras. We didn't realise the danger before the water caught a heavy, anchored longtail-boat and tossed it towards the shore. The beach was soon flooded, and we heard cries of anguish.

On our way to the bay we met people fleeing and joined those who looked to see if somebody had been caught by the turbulent water. At the same time we thought like mad to figure out what could be done, if we did spot a drowning person. 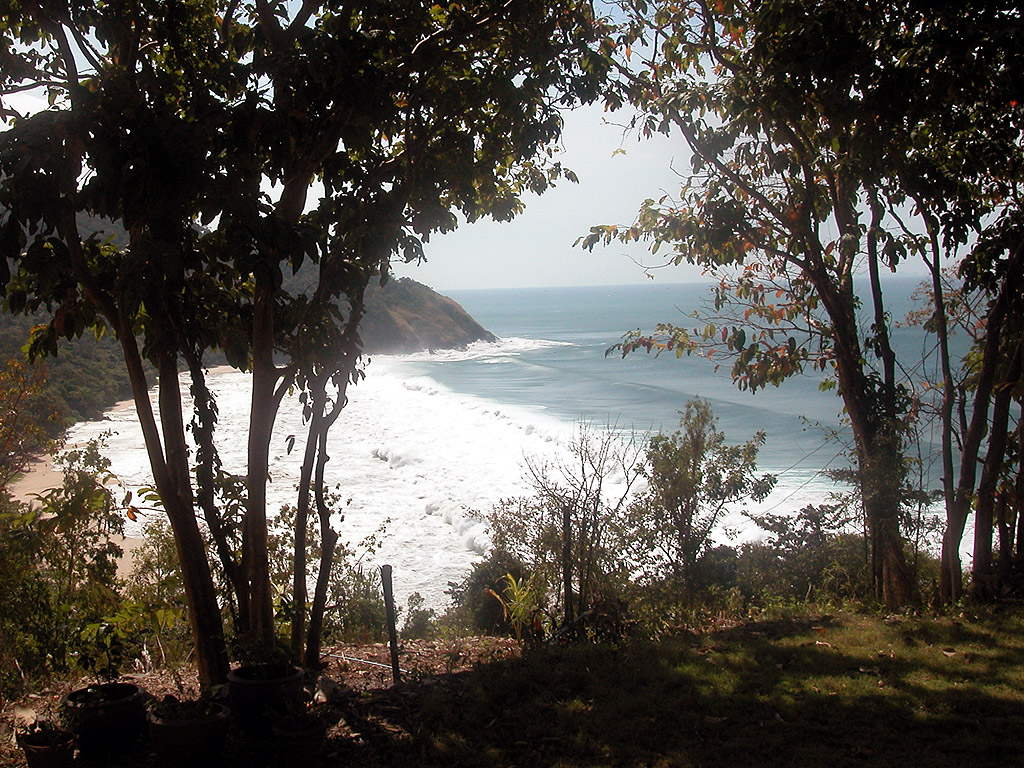 A garden full of stories

When were convinced that everybody was on dry land Jon and Tove invited people to join them in their garden on the mountain. Around 150 persons found a safe haven here. A spontaneous organisation soon developed. Doctors and nurses on holiday took care of the few people who were wounded. Medicine was collected from first aid kits brought from home. The employees of the restaurants produced Thai meals. Others got supplies of water, soft drinks and beers. Passports, traveller's cheques, plane tickets and a napkin with good wishes for Christmas, which had been wrapped round a present from a boyfriend, were laid out to dry in the sun.

During the day the news from the BBC and the Thai media began to form a larger picture. Not until then did we realise, that many countries around the Indian Ocean were victims of what according to the UN was the largest natural disaster in 40 years, and that it was uncertain, if there was still more to come.

Fortunately cellphones could be used in one corner of the garden. From here everyone tried to get through to his or her loved ones on the overloaded network. In the receiving end those who had heard about the catastrophe were relieved. But not everybody had heard yet, one mother, who send a message that she was OK to her daughter in Denmark, received the baffled answer: "So am I, and now I am going to have Christmas lunch with Grandma."

Many of those present told their own and other peoples' stories over and over in order to overcome their shocks, and the garden was full of stories. About the wounds it had cost to get a picture of the wave. About being caught by the wave while sleeping in a tent on the beach and struggle hard to get ashore. About fleeing barefoot through the stony and thorny jungle. About having wanted to see a tsunami and bitterly regret this wish. About snorkeling on the safe side of a neighboring island and not know what had happened until you returned home. About loosing what you brought for the holiday because your bungalow was washed into the sea. About loosing everything because the wave hit your place of work as well as your home.

As the day passed by families who had been separated were reunited. Everybody applauded when an American father, who had been out diving, finally could embrace his two daughters and his wife, who cried with joy.

No less than 130 persons from many nations spent the tropical night on the lawn. Some people slept, some people had conversations, some people wandered restlessly around, and a few people continued the party, that had been interrupted by the wave. 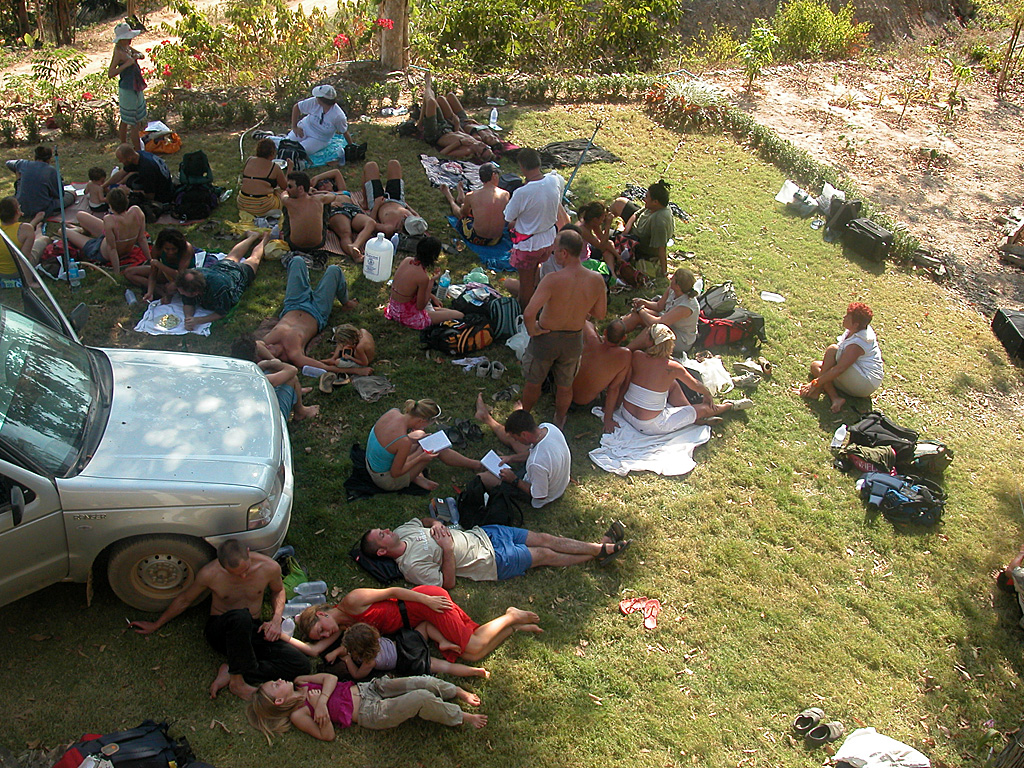 The joy of being alive

The following day still more people ventured to the beach to look for things lost, and at the same time the stories got a more optimistic tone. They were about being reunited with a backpack, which you had given up seeing again. About fetching your new diving mask at the cliff where you spotted it in a pair of binoculars, although your parents thought this impossible. About collecting three right sandals and keeping them in the hope of coming across matches for them. About finding a suiting pair of glasses and putting them on in front of the owner. About retrieving your laptop filled with sand, but with hope of saving your travel journals. About finding one of the bartender's necklaces and asking him the price. About diving for beer cans and discovering a bottle of champagne, which a French family had brought for New Years Eve. About realising that although the luggage was missing, you still had "everything you needed". About keeping the key of a bungalow, that had been washed into the sea, "because it is the key to life."

The many individual stories intertwined and grew into a beautiful shared story about the joy of being alive.

The media told about the lack of warning systems, about enormous numbers of casualties, about the international efforts to send aid, about scientific explanations of the phenomenon and about people, who suffered far more than we did.

Bamboo Bay was less damaged than we had feared, and some guests moved back into their bungalows. At the same time a warning system was established for the resort, because the news still spoke about possibilities of minor earthquakes and subsequent waves. During the day the restaurant was re-established by members of the staff and helpful guests - in the evening we dined with a view of the bay again.

The second night thirty some people enjoyed a safe sleep in the garden. Many new friendships were formed between travellers and locals brought together by the wave. The red cat that mowed in during the turmoil was named Tsunami.

On Ko Lanta the catastrophe cost around ten human lives, but we were lucky, and to us it became a life-confirming experience. A moving example of mutual help through dialogue in a group with representatives of eastern patience and western ability to take action. 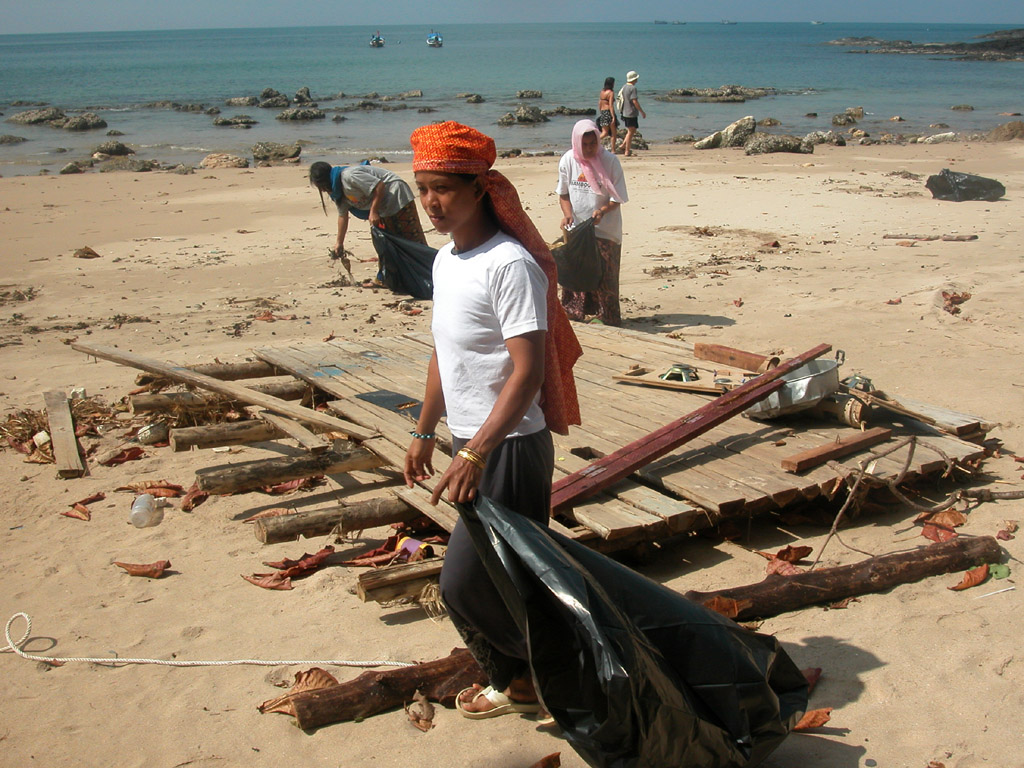