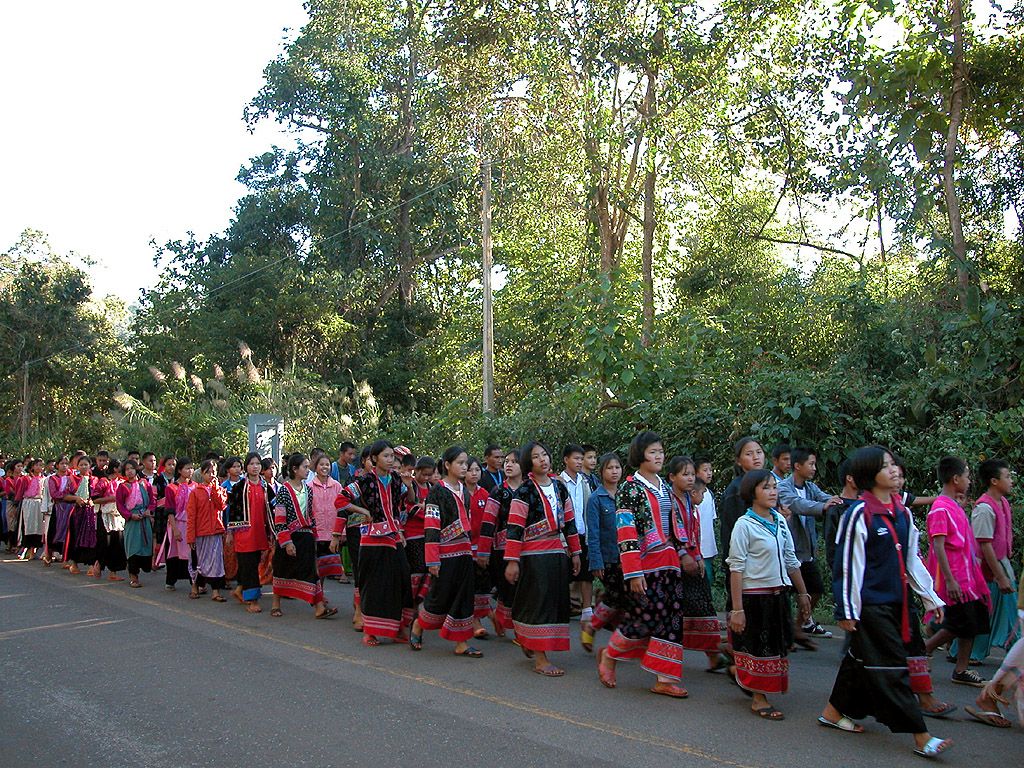 I Concentrate on the Present 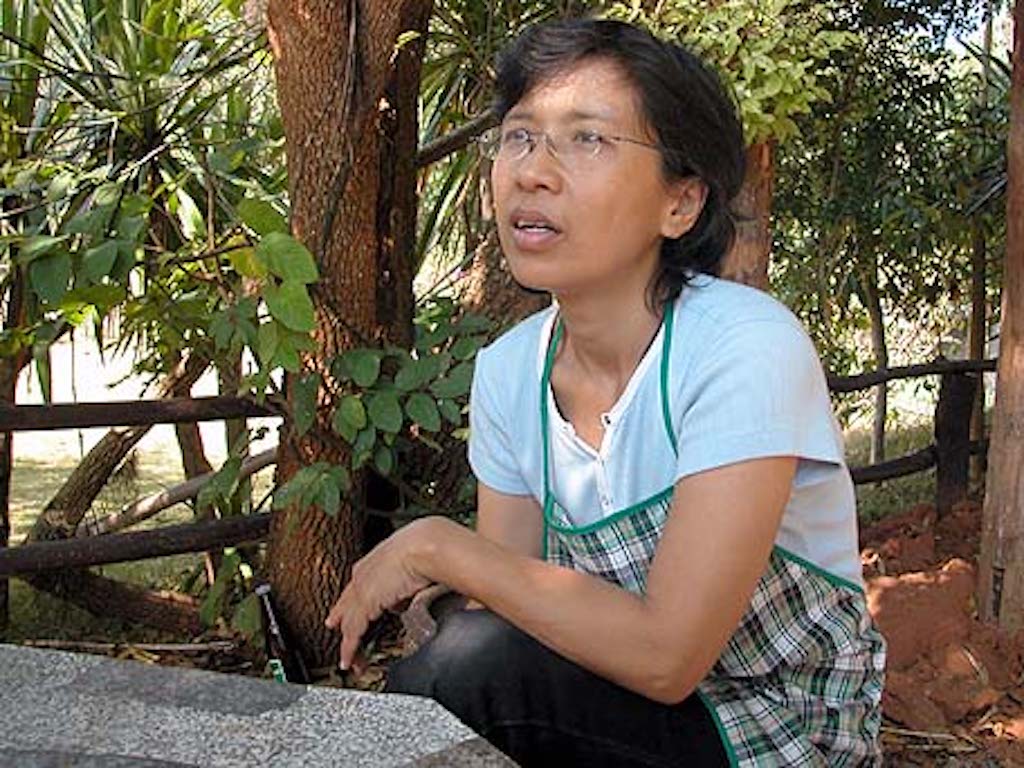 We met Thanit Boodphetcharat as a host in the international friendship organization Servas. We first got together in Chiang Mai where she lives and works, but we talked in the beautiful garden of her sister's guesthouse situated near a small river in Sopping.

I quit my job as a researcher and teacher at the university and began working part time because I got ill with cancer in 1997, and I wanted to take better care of my family and myself. Since then my days have all been very different, but I usually get up early in the morning and start the day with meditation.

When I have a job in a project I spend time at the computer, after that I practice yoga to get rid of the pain in my back. Then I work in the kitchen cooking and so on. Afternoons I usually spend buying things in Chiang Mai for my sister who runs a guesthouse in Soppong. In the evenings I don't work but read and sometimes go to the temple and listen to the monks praying.

Right now I help a friend with a UNESCO project about a group of sea gypsies living in the South of Thailand, we are developing a model to analyse their social, economic and environmental situation that may also be used other places in Asia. Much of my work in different projects is like helping friends.

My husband works for the government and spends the week in another city, so we are only together during weekends. Often we go to help his parents or my sister, and I also feel responsible for my nephew and niece.

I learned to work hard

My Dad passed away seven days before I was born. We were very poor, our mother only had enough to give us food and send us to school. She was so brave, we were six children and I am the youngest one. My Dad was Chinese and my Mother Thai and we lived in Chonburi 60 kilometres South East of Bangkok.

My Mum had a small restaurant and worked hard to adapt herself to her Chinese family, she never married again. I learnt to work hard from her, in grade seven I woke up at four o'clock in the morning and went to the market on my bicycle and bought food for our restaurant.

I am the only one in the family who got a university degree. I am 43 and my sister is nine years older, she donated her life to her younger brothers and sister. She only finished secondary school; but she is very clever, while I use the computer a lot, she has a very good memory.

I didn't have time to play in my childhood, but sometimes I stayed late at school to avoid working. I started going to the Buddhist Sunday school for the same reason. My Mum knew that, but she accepted it. In the Sunday school I began to learn to say things in a group, and they gave me a scholarship to go to secondary school. I really appreciate my Mum and my childhood, because it taught me to be strong and manage hard things like my disease.

I wanted to use my time efficiently

After secondary school I studied at a government boarding school in Bangkok, my mother trusted me to go there. When I was 16, I moved to Payap University in Chang Mai to take my bachelor degree. I went north because I liked the nature and the scenery of that part of Thailand, unlike other teenagers I didn't enjoy big cities.

I wanted to use my time very efficiently, and while studying I worked part time at the university. I gained experience by working with an American professor from Massachusetts Institute of Technology in the computer lab, he taught me everything about computers. I was impressed by his ability to be my boss as well as a good colleague, in Thailand the difference between students and teachers is traditionally big. He taught me that when you give you receive something in return, and I still find that important. I took my master degree in Environmental and National Resources Management from Mahidol University in Bangkok.

We met in a project

My husband and I met in a project I evaluated for the Thai and German governments. The purpose was to help the hill tribe people grow cash crops other than opium. We married in 1992 and didn't want to have a big wedding as we wished to save money to buy a house. So we just planned to send out an announcement card to our teachers, families and friends. But my husband's parents wanted us to have a wedding in their village - Sukhothai - a monk came to the house to perform the ceremony and we had a party for a few friends and relatives.

At that time it was not common to live together in Thailand without being married, but this is changing now. In the beginning we wanted to trust ourselves, but we decided to involve his parents in the marriage to give back to them and to make them happy.

After the marriage I went to the USA to visit an American friend who had lived with me in Chiang Mai while she wrote her Ph.D. At that time I became a member of Servas and took a course as a tourist guide to be a good host. I like to have foreign visitors like you and share with them. I keep contact with some of my Servas friends; a couple from Ireland send me money every year, and I donate it to buy things for the hill tribes. But I don't want to make long journeys myself. I just go on small trips to China, Nepal and Japan with my jobs.

I changed my lifestyle

When I got ill and almost died in 1997 it made me think and change my life, I don't say that I am cured, because you never know. I have evaluated many projects, now I take time to evaluate myself every day. I want to look at my own feelings from the outside to understand them and not let them control me. Sometimes I get very angry or very happy, and this is OK, but you should not think these feelings will last. You should maintain yourself in the passion and not let it swallow you.

I don't want to just close my eyes and meditate. Thinking, talking and doing should be connected so that Buddhism is practised in everyday life. I think that you have to start with yourself, then the wakes may spread to other people like when you throw a stone in the water. The past can't be changed and the future can't be shaped, so I try to concentrate on the present.

Normally you are not concerned about your breath until you can't breathe any more. I try to concentrate on my body and spirit through meditation. By doing good things now you may honour the heritage from your parents and at the same time lay the foundations for generations to come. You should not try to teach other people before they are prepared to learn. I try to trust the good things in other people and in life. Actually I am thankful that the disease made me change my lifestyle. If you understand yourself well it is easier to live in a world that changes fast.

We also worship our ancestors to honour the heritage they gave us, and the spirits that own the land of our houses, to me that shows respect for the land.

In the past I lived in the western individual career style, now I try to combine it with the oriental style, where you care more about other people. The Lord Buddha said that you have responsibility for people around you in six directions, and I try to find a balance. To me Buddhism is not so much a belief but more a practical philosophy you trust, because you have felt it work. You may find wisdom and enlightenment through practice. 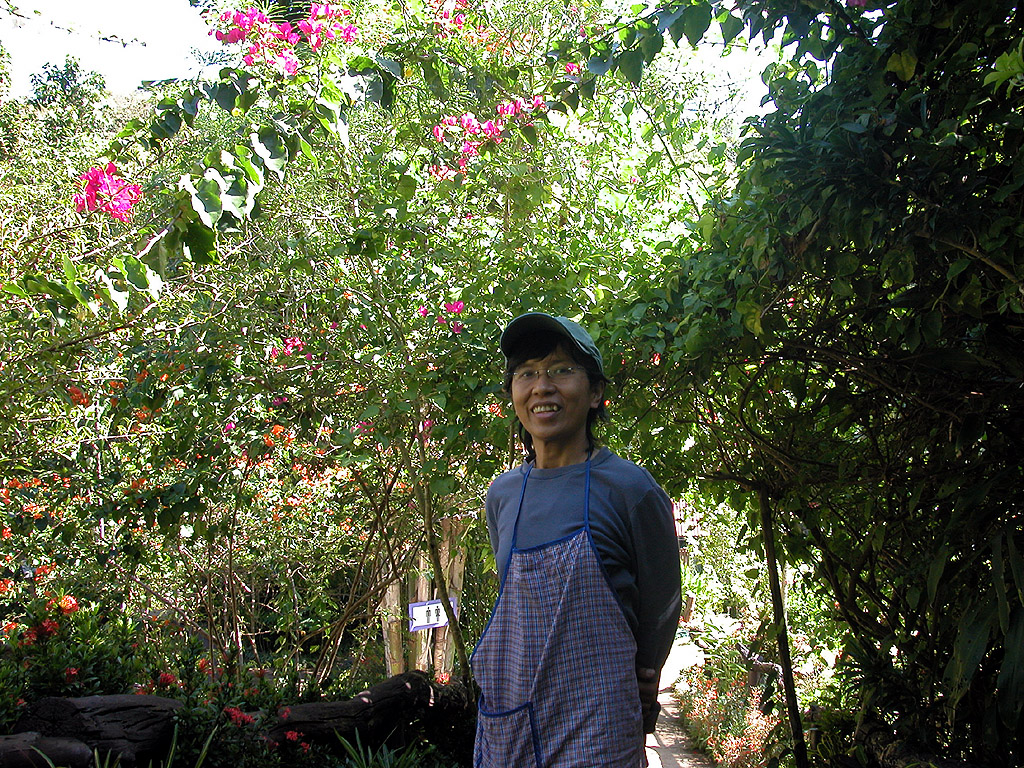