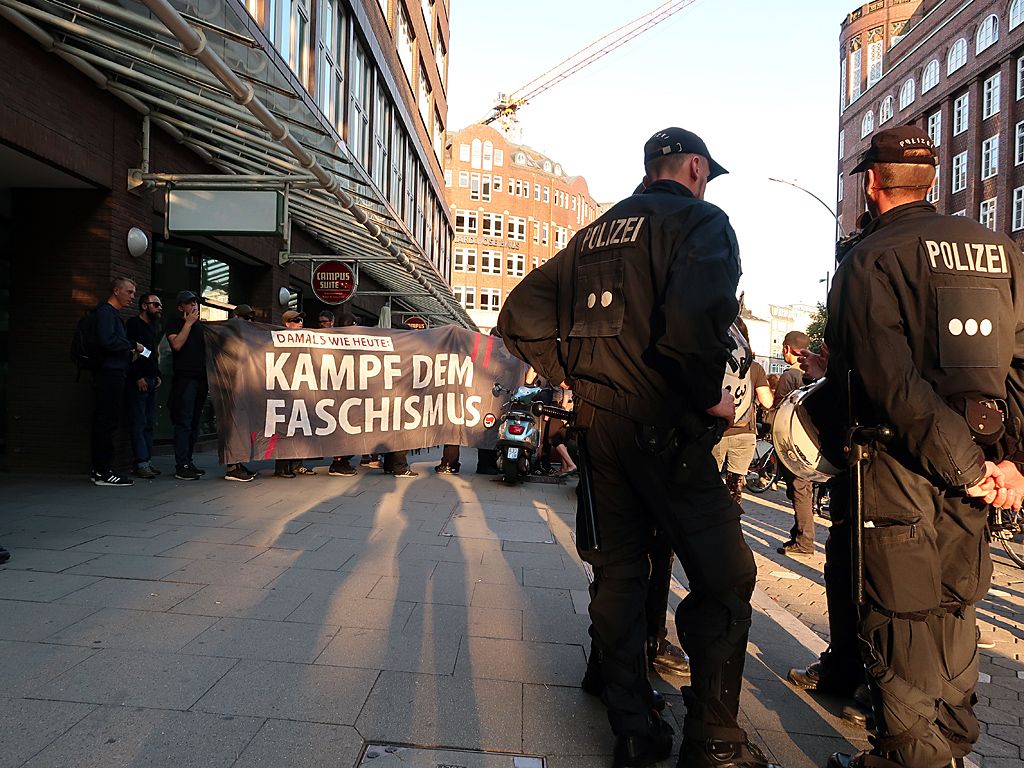 Sarah was born and grew up in Germany. Her mother’s family are Iraqi Kurds, her father’s family are Germans. She has attended a Danish kindergarten and Danish schools in Germany, has finished her education as a social educator in Germany and as a social worker in Denmark. She lives with her Danish boyfriend, who is a musician and works in Odense, where we spoke.

My task is to help

On ordinary days, I get up around seven o’clock and go to work. I am a social worker in Odense and help people with long lasting mental disorder in their homes. My job is to support people who have been in a crisis with their daily lives. We set goals and make plans, I also help them contact the health service and the municipality. The focus is on what they can do themselves to experience success. I work in an interdisciplinary environment, this is a fascinating way of working and I often talk with my colleagues.

In my spare time, I take care of my boyfriend and my house. I have worked as a volunteer in the music world, but this is on a hold right now. After work, I often go to the Students’ House or a café, perhaps to a concert in the local park. I have just started working as a volunteer in Repair Café Odense, we oppose the throw-away culture, I help repairing clothes.

I am in the process of learning to own a house and a garden, my boyfriend likes to be at home. We also have an old Toyota camper, we just wanted a place to sleep, when we went to festivals and to the beach. But we have become engaged in the veteran car environment, and the car has won a prize as the best restored vehicle.

My mother’s family are Iraqi Kurds, who fled to Bonn in the 1970s. When my mom was seventeen, she became tired of the family’s Muslim norms and fled to a refuge. Later she was employed as kitchen helper on a holiday farm with horses on the island Sild in the Wadden Sea. My father, who was a musician, worked the same place as a conscientious objector. They met there. When dad moved back to Hamburg, they broke up their relationship, not until later my mother found out that she was pregnant.

They were both very young and working on finding their place in the world. My father became a drop out, moved into a trailer and worked as a street musician, he still lives like that. My mother first gave me free for adoption, but regretted this and was allowed to keep me. Her parents found us and tried to kidnap me. Many things happened in my life already while I was an infant. I don’t remember them, but they have probably influenced me.

When I was a couple of years old my mom and I left Sild, because she found out that people there not only smoked joints, but also used heroin. We moved to Niebüll, where my Mother coupled up with Hauge. He was a quiet North Frisian, who became like a father for me. He taught me to eat ecological food and to bike. Hauge took an interest in old cars and motorcycles, he was very proud, when my boyfriend and I bought the Toyota. The duck tattoo on my wrist is a reminder of Hauge, who died last November.

My mom has restored the bonds to her family, but I find it difficult to relate to their culture. My cousins are allowed to do many things, but they always have to be aware, what other people think, and they can’t choose their education. Mom has fought their case.

My grandmother created the link between my biological father and me, when I was six. Since then I have spent many vacations in her holiday home at the Baltic Sea. My dad has made me experience city life in Hamburg and what it means to stand up for your opinions.

Young people must be challenged

My mom cleaned holiday apartments, she was a single mother and felt that the German kindergarten I went to was hard on her. Therefore, I was sent to a Danish kindergarten and a Danish school, this made me a member of the Danish minority. In the first school, we also learnt Frisian. I understood Danish, but couldn’t speak it properly, so I changed school in third grade. In the new school, I quickly learnt the language. My languages are German and Danish, I don’t speak Frisian any longer, and I never learnt Kurdish. From my mother’s culture, I mainly know the good food. Danish was the secret language me and my friends used that our parents didn’t understand, even though my mother took several Danish courses.

The school represented Danish values and followed German rules. My mother thought it was too soft, I said that we had no homework, so that I got time to be with my friends. I did the homework we had in bed during the night. She wanted to take me out of the school in fourth grade, but I protested, and I think my grandmother, who was an educated teacher supported me.

I started high school at Duborg-Skolen in seventh grade, but I had problems at home and didn’t pay enough attention to school, so I got bad marks. I didn’t feel understood, didn’t do homework and began to play truant. I took the school bus to Flensburg and had a good time with other students, who also played truant. In the end, I moved to a secondary school Gustav Johansen-Skolen, near the high school. This was what I needed, somebody who took care of me with consistency. They called my mother, when I played truant. Since then I have never done that.

When I finished 10th grade I had no idea what to do next. I had a year’s internship in a Rudolf Steiner Kindergarten, it was exciting and taught me many things about life. Afterwards I decided to take an education as assistant kindergarten teacher at Fachschule für Sozialpädagogik in Niebüll. During the two years’ education, I realized that this was not my course, but I learnt a lot about myself and became more reflective. I therefore applied to study social education at the same school, this was a wonderful time. I could use my experience from country life as well as city life in the classes.

My teachers recommended me to go on studying and follow my interest in social psychiatry. First I spent a year in a workshop, that helped people with psychic challenges back to the labour market. We had a webshop selling second hand Lego blocks. Going good detours, I ended up at the education for social workers at UC South in Esbjerg. I was accepted, because I had studied social education in Germany and belonged to the Danish minority.

After finishing my education as a social worker, I would have liked to study at Roskilde University, but was not admitted in the first round. During a period of unemployment, I had a subsidized job at a drop-in and treatment centre for people with mental diseases and problems with abuse in Odense. I was accepted at Roskilde University the following year, but dropped out after one semester, I am a practitioner not an academic.

After that I got a job at CPUS in Slagelse, and they worked according to the principles, I cherish. Already in my education as a social educator I wondered that the users had so much medicine. In Slagelse focus was on the person and his or her life story. What is the purpose of your life? This was the first time I saw progress and was able to actually finish consultations. This confirmed what I had believed for many years. You can be successful if you work together based on a shared vision. Young people should be challenged not wrapped in tender care. The system needs people like me, who know why some people drop out. Already as a young child I had to understand the choices my father made.

Since September 2017 I have worked in Odense helping citizens in a part of the city, who have had a long lasting mental disorder. I visit people in their homes and help them get the everyday life, they want.

I move in extremes

My boyfriend and I met in a community centre in Esbjerg, where I worked as a volunteer. We started talking at a Friday bar, he lived far from town, so I offered him to sleep at my couch. We have been together since that day. My plan was to return to Germany, so I had no intention of getting a Danish boyfriend. But we spoke well together, I had not expected to meet a person who knew so much about alternative culture in conservative Esbjerg. He had played in a punk band and now he is shouter in a metal band. As a teenager, I often went to Punk concerts and punk festival. We fit well together and soon we have been a couple for six years.

I prefer to move in extremes, I am often caught by something other than mainstream, I like to be reflective, and I find this in the extreme cultures. I thrive in the punk world, the metal world and the ecological movements. The Repair Café is about environmental politics and about working together for something important. I am also inspired by people’s lifeworld. I have not travelled a lot, but I have been in many different cultures. This has made me less prejudiced, but I still have difficulties with racism and nationalism.

The energy from my families makes me very excited when people demonstrate. Sometimes you simply have to enter barricades to set a limit. I was in Hamburg during the G20 Summit last year, this was a perhaps my most violent experience ever. In my private and professional life, I also like to challenge in an explorative manner.

Both my mother and my father have fought for what they believed in. In my teens, many of my friends used drugs, I have never done that. I have this strength from my parents. They have taught me that you can overcome the challenges of life.

I have no plans for the future. I have bought a house with a thirty-year mortgage, but this doesn’t mean that I am going to live there this long. In Germany, you are very dependent on your family both when you are young, and when you are old. My family took care of me till I was 18. I imagine that at some time I will return to Germany to take care of my grandmother and my parents. If it can be prevented, I don’t want them to go to a retirement home. I trust that they will do well, my grandmother’s sister worked as a general practitioner until she died at the age of 95. Family and friends are everything to me.

I have voted for the Greens in Germany, in Denmark I sympathize with the Alternative. They dream, and you should be allowed to dream. I hope the world will be a bit more humane and turn down racism and fanaticism. Nationality is not important to me, we are all human beings, and Human Rights are decisive.

You can make a difference in your immediate surroundings for instance it is important, what goods you buy. It is important to respect each other and the environment, this is closely linked.