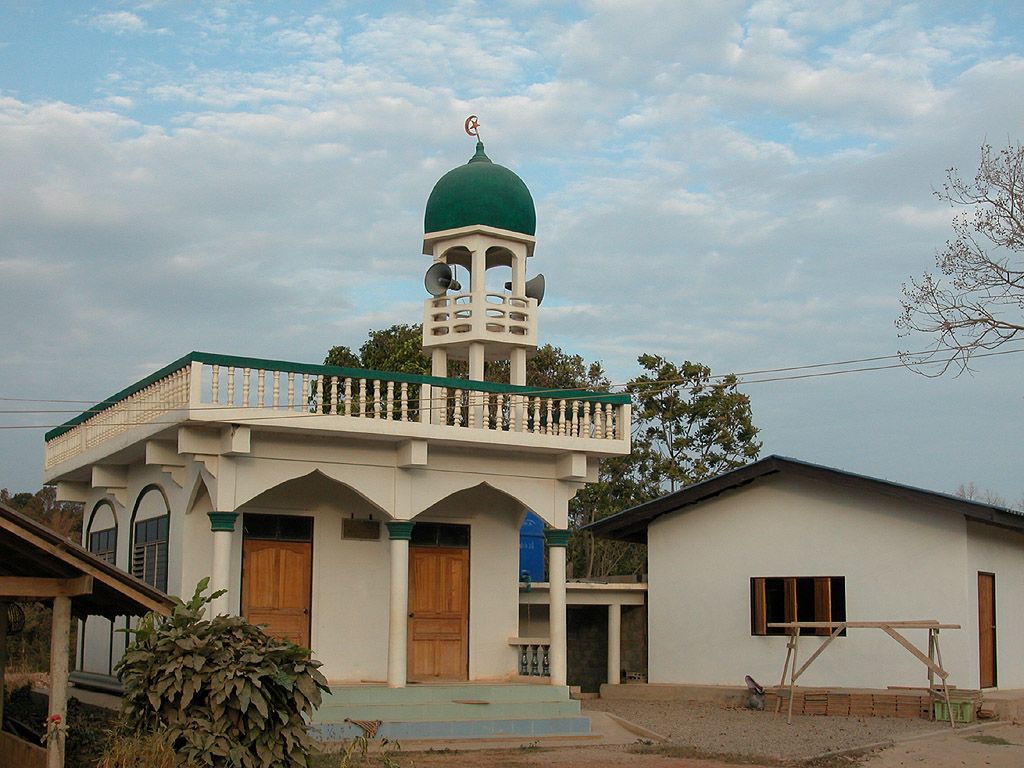 Good Deeds will be Rewarded 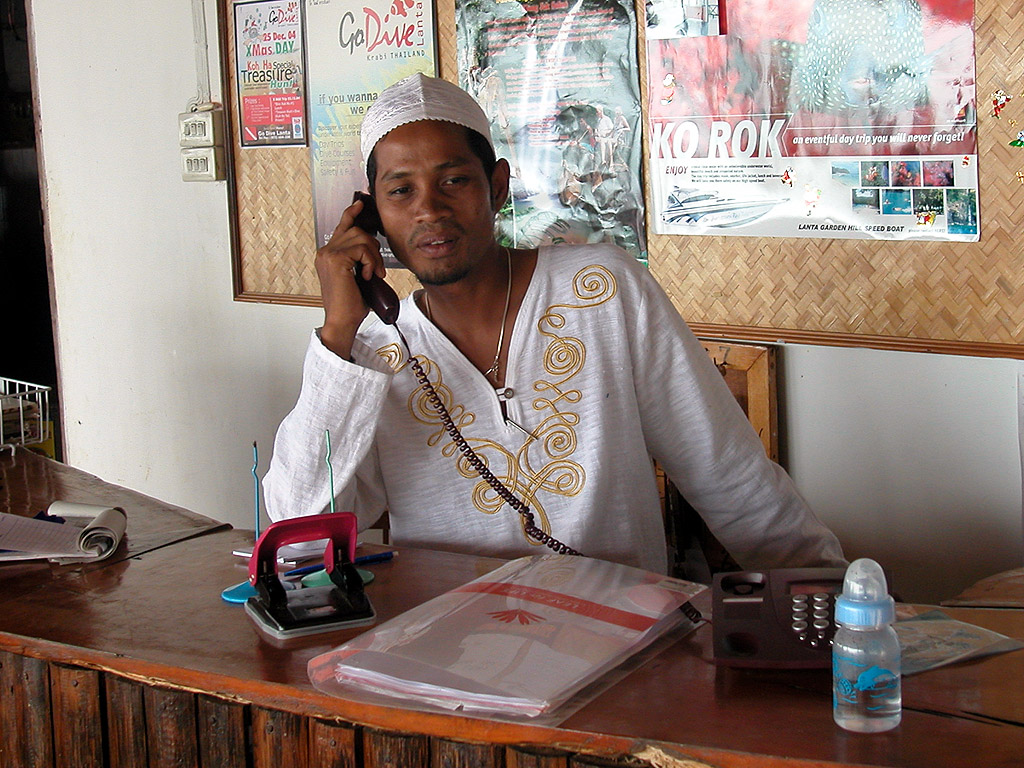 Nuay Kokyai is Hanne's brother's partner in Bamboo Bay Resort on Ko Lanta in southern Thailand. He is a practising Muslim. We talked in the restaurant of the resort with a beautiful view of the Andaman Sea.

When I wake up in the morning I bring my children to school. Then I go to Bamboo Bay to make sure that everything is OK in the resort and tell the employees what to do. When I have time I go to visit friends. I have many friends all over southern Thailand, and I like to see them and their parents. I think it is important to take care of old people. My father and mother live about three kilometres from my house. When we married my wife and I lived together with them for one year.

Every Friday I go to the Mosque around 12:30 to pray with the other Muslims. Before that the imam reads from the Qur'an and tells us, what we should do to be good. Sometimes they also explain what happens around the world in the mosque. The imam talks about religion, and the punjab, who is an elected official in the village, tells about things from the government. The women can go to the mosque two times a year before and after the Ramadan, we call it Hariraya.

This Friday the Imam talked about the tsunami in the Indian Ocean, he said it was a punishment from Allah, because Muslims everywhere in Thailand sell beer and spirits to the tourists. But I don't do that; in our resort Jon gets all the money from the bar. Until one year ago my father wouldn't visit Bamboo Bay, because he thought I was selling beer, but now he knows that I am not. I am happy, that he comes here now.

I am thirty-three and Ko Lanta was very different when I was a little boy. There were no roads, no cars, no motorbikes or bikes. We had to walk or sail from our village to Lanta Town to buy rice. My father had some small boats because he sold fish; they had no engine but were rowed with oars. He bought fish and sold it, and my mother is very good at making dry fish. She is even able to clean and dry the stomach of the fish and cook it with vegetables. This is very nice food. My father still sells fish, prawn and squid.

When I was seven I began to go to school two and half kilometres form our home. We had to walk to school, but sometimes we went to the beach to play and rest in the shade of the trees for a whole day. I didn't do this often because I worried that my mother would get to know and spank me. I went to elementary school for six years.

After that I went to high school for another six years. The three last years were at a boarding school in Satun in southern Thailand. Here I met Nut and her family, who is now one of the managers of Bamboo Bay.

I went to college in Songkla to study how to manage building projects. It is quite difficult in this area, because you can't just follow a plan; you have to be able to adopt it to the landscape and the circumstances. Even Jon can't always do that.

I saved my money

After my education I started my first resort on Ko Lanta together with my brother. We had that for three years, but I drank all the time, and my mother cried and told me to sell the land. I couldn't say anything to defend myself because I was wrong.

So I sold the land and went to work in the Land Office of Ko Lanta. I worked in 53 islands telling people about the borders of their properties and so on. I worked in that office for twelve years until last year.

I saved all my money because I wanted to have another resort. After six years I rented land and built a resort with fifteen rooms, a restaurant and a bar. Then the owner of the land wanted to sell it. When I heard about that, I made some research and found this land and bought it, but I only had money to build three bungalows. About thirty of my friends came and helped me build the bungalows and the restaurant. We did everything by hand because there was no electricity and no machines here then.

Jon came to Ko Lanta in 1999 to spend Christmas with his family. He saw my resort and wanted to reserve rooms for the following Christmas, because he liked the bay very much. He talked a lot with my brother in law, and on the last night he came to speak with me. I knew how to make a company for a joint venture, and we discussed that. On the following day Jon and I went to Krabi to see a lawyer, and he sent money when he came home.

We care about each other

I don't know why Jon and I met. - It is not only business, we care about each other and about our families. The first years were quite difficult and cost us money, but the last two years have been OK. People know Bamboo Bay now, we have a good staff and offer good service. The resort looks nice, if something breaks we repair it immediately. Our staff and our guest are like family to us.

Now it is easy to work with Jon, but in the beginning it was sometimes difficult. Thai law and customs are different from western law and customs. Westerners like to work after a plan and finish a project at a fixed date. Thai people are more flexible, and we don't work like machines. Jon had to learn about Thailand and Thai ways of doing things.

He helped with everything. He even carried cement, although I told him not to do so. One time he slipped and broke his leg carrying chairs and had to go to Denmark to have it fixed. Afterwards he came to stay in our house. Jon and I had to learn to work together, but now we trust each other. Jon is different from other farangs I know. - He is like one of the family.

I decided to marry Ashima

When I had my first resort, I had a girlfriend who was a nurse in Switzerland, but she was a Christian. She came to Thailand three years, but because of our different religions, we had to part and smile.

I met my wife in Lanta Town, when I lived with another girl. I studied English because I wanted to have a resort. And Ashima also came to learn English. I thought she was very nice and began to meet her. After six months I presented her to my family, and they liked her because she was Muslim and not open, like my other girlfriends had been. So I decided to leave my girlfriend and marry Ashima. Now we have two boys and a girl.

Mohammed had four wives because he could take care of them all, and some Muslims here still do. I may have girlfriends, but I will only have one wife.

I am the president of the Guide Association on Ko Lanta and go to meetings every month. I would also like to be elected for local politics first as punjab in this village and perhaps later for the regional government. I want to make the village good for the people with roads and everything and then improve the villages around it. But I still want to keep the resort for my family and for Jons family. I like to do things for other people.

Because of the tsunami many people in southern Thailand have lost their jobs, and the government will have to help us with money.

In my opinion the Muslims in the three southern provinces of Thailand, who commit acts of terror are crazy. Some young people kill for money, they don't obey Muslim laws, and many Muslims don't like them. What they do is wrong. Here on Ko Lanta seagypsies, Chinese and Muslims live peacefully together. Next year I want to go to Mecca and at the same time visit Denmark to see Jon and his family.

If we do good things for other people, it will be rewarded, when we die. 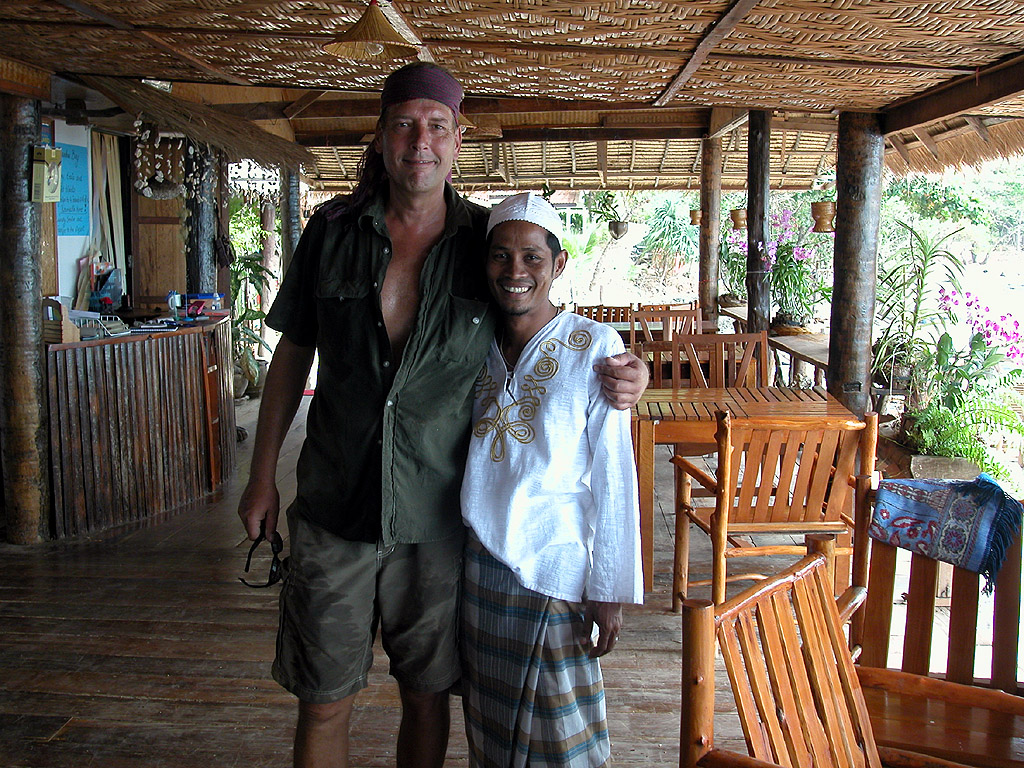