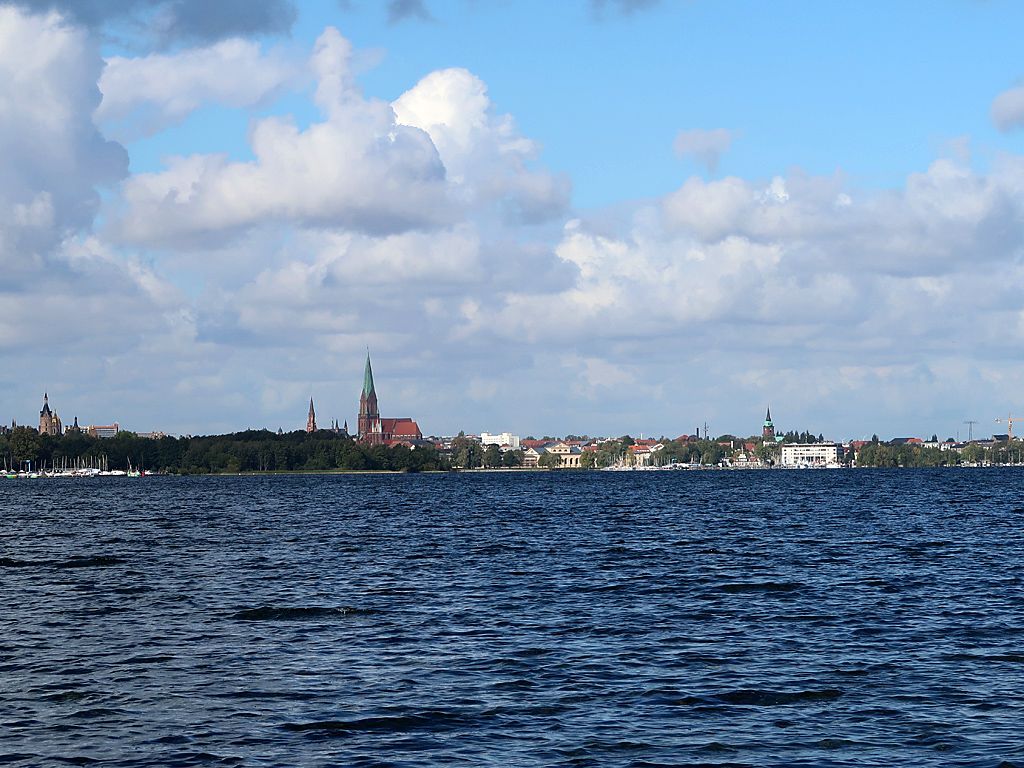 I Felt Sad when the Berlin Wall Fell

We met Klaus Helms and his wife Marita in their cosy home in Schwerin. Klaus has worked for the German Railways most of his life. Before the interview, he told us that he was still a communist and therefore not a typical former citizen of the GDR. 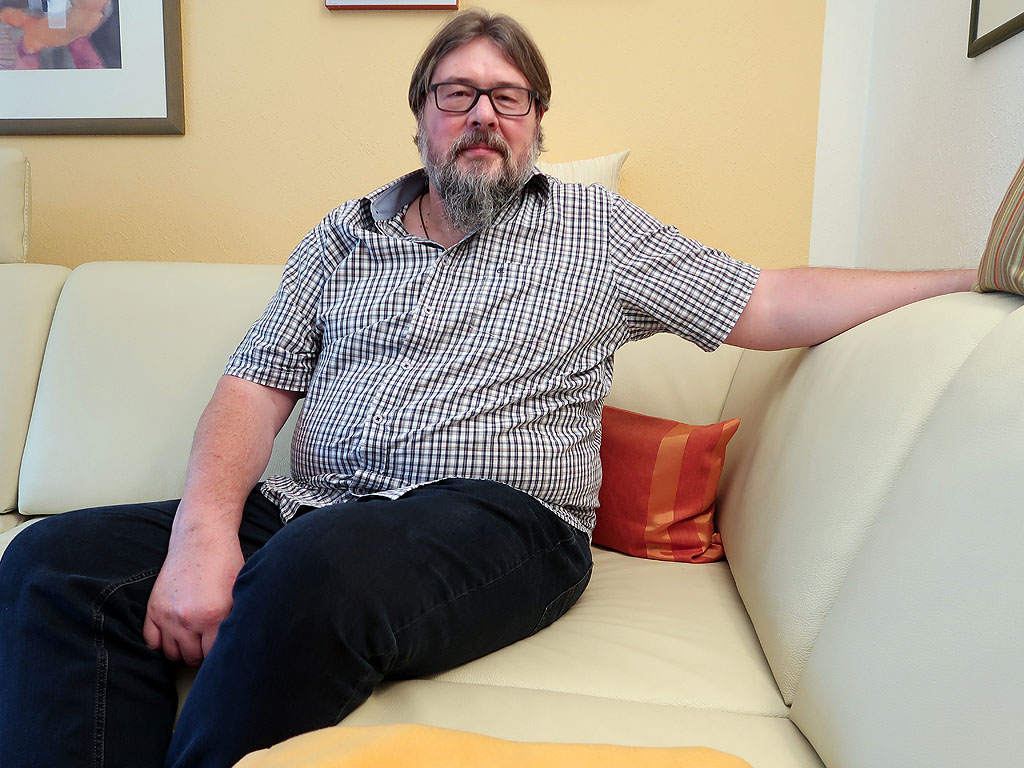 Political extremes are a hobby of mine

I stopped working a little more than one year ago and have not quite found my routines yet. My workplace in the German Railways moved to Berlin, and I had a suspension so that I could work part time for a period and not at all for a similar period. I pay this with a reduction in my wages and my pension. Officially I will leave my job in 2020.

I get up around eight o’clock in the morning, my wife Marita gets up half an hour later. We have breakfast and do our chores in the house. I spend quite a lot of time with the newspapers, being on the internet and reading books. I mostly read about history and politics for instance the Second World War, Maoism and Trotskyism. Political extremes are a hobby of mine.

In the afternoon, I take a nap. I also like to spend time outside working in the garden or sitting on the porch watching the birds. They are dear to me, and I feed them. I like to stay at home, my wife has more appointments. In the evenings, we sometimes go to the cinema or the theatre.

We travel three or four times a year. We have been on cruises all over the World to the US, Canada, Alaska, the Mediterranean Sea, Singapore, Malaysia, Cambodia and Vietnam. But tropical climate is too hot for me. We also take car trips to places like the islands Rügen and Usedom in the Baltic Sea. Next week we will go to Leipzig and Wernigerode. Marita makes photo shows about our journeys.

I worked for the German Railways

I was born in Crivitz in 1957. I lived as an only child with my parents and grandparents and was grandmother’s child. This was a very good time. After twelve years in school I went to the army for three years. I was a film operator for the frontier guard at the border along the Elbe River, but I only saw the border a couple of times. While I was a soldier, a deserter from the National People’s Army (NVA) shot two guards, who slept at their post, and went to the West. This was a dramatic experience.

In 1978, I began to study in Berlin, but I wasn’t really motivated for it. So, I dropped out and had a job in the German Railways as a transport worker. My father and uncle also worked for the company. But this job didn’t satisfy me intellectually, and from 1980 I studied statistics in Berlin for four years. When I had my diploma, I got a job as an accountant in the railways, and this is what I have been doing most of my working life.

The only break was when I moved to Neubrandenburg with my first wife and worked in a pharmaceutical company for four years in the late 1980s. After our divorce, I returned to Crivitz and began to work for the railways again. Marita and I moved into this newly built house in Schwerin after our marriage in 1996. Some of the houses here were made by a Danish company.

I was a propagandist

In Neubrandenburg, I worked as a volunteer propagandist for Freie Deutsche Jugend together with a college, whom I later found out had been a member of Rote Armee Fraktion in the West. Her name was Silke Maier-Witt. To my surprise, I saw in the news that she was arrested in 1990. We were both members of the SED. I became a candidate, when I was 18 years old out of conviction, and a full party member one year later.

From my present point of view, I can say that we were indoctrinated, but this was also true of people in the West I think. West Germans could come to the East, but rarely did so, for them it was like going to Siberia. Many people in the East could also go to the West for instance to see relatives, some stayed in the West, but most of them returned. People didn’t only flee from the East, some westerners moved in the opposite direction.

Marita who worked in public administration comes into the conversation at this point and tells, that she became of member of the SED under pressure in order to go to the university. She was also advised by her employer not to visit her grandmother in the West on her 90th birthday for political reasons. Her sister who was a hairdresser could go.

Many East Germans were disappointed

Klaus tells, he had personal problems because of his divorce and didn’t really experience the changes when the Berlin Wall fell in 1989. As I visited a friend of mine in Berlin I saw the demonstrations and realized, that this was the end of the GDR. It made me feel sad, because I would have preferred the country to continue, but most people didn’t want that.

Many East Germans were however disappointed, because they didn’t get, what they had hoped for. Wages for instance are still only 82% of western wages, this is not true for myself, but I also think of other people. Marita has another point of view. Many things were not bad in the GDR, she says, but to her the changes meant freedom from political pressure and new possibilities of travelling all over the world, not only to socialist countries. Travelling is an important part of her life.

Klaus visited the Soviet Union and Poland for working holidays, when he was a student. He helped build a concrete street in a sovkhoz near Moscow. The work was primitive and ineffective, and I got the feeling that it didn’t really matter if the Czar, Lenin, Stalin or Gorbatjov ruled the country. A group of Russian men spent all day drinking vodka by a river and invited us to do the same on a warm day. A memorial for soldiers who fell in the Second World War was completely covered in weeds, and we German students cleaned it. It was a contradiction that on one hand the Soviet Union was an important world power, on the other hand simple everyday things didn’t function. In Poland, where we helped build tracks for street cars in Warsaw, I was shocked by Polish workers’ antisemitism in socialist times.

After the reunion in 1990, the organization of the German Railways constantly changed. I did the same work in the same place, but for more than ten different firms. Every year I was in a new company and had a new boss often from the West. I wonder how we made the trains run in spite of the reorganizations. My education in statistics from GDR was recognized, but many people had to take an extra semester or two, this was way of making us second-class citizens.

It is important to be truthful

For several years, I was a treasurer in the German speaking branch of the left union Industrial Workers of the World (IWW), which covers Germany, Switzerland and Austria. I have also been a member of the works council of German Railways for the IWW. I was elected for this post two times, the last time I had enough votes for more than three seats, but I was our only candidate. I am very proud of that. On my Facebook Page, I link to records about historical moments in the labour movement.

I have been a left extremist since my youth. I listened to Radio Tirana every Monday evening, and I sympathized with Albanian politics. The Albanians said, you should trust your own strength, and I didn’t like the fact that GDR had obtained a loan from West Germany. I thought that the SED had reached the heads, but not the hearts of the East German people. I wrote a letter to the Albanian embassy about this and was contacted by representatives of the Stasi. While I was a student in Berlin, I was recruited as a volunteer Stasi agent for two years and should make contacts to the North Korean embassy and to Albanian and North Korean people on the Leipzig Fair. It was interesting for me to see, how the Stasi operated.

From 1990 to 95 I was a member of the Communist Party of Germany. I left it again because of its close contacts to North Korea, which I think is a monarchy not a socialist country. I am still a communist, but not a party member. I now think that trade unions are more important than political parties. Next week we will have an IWW meeting in Leipzig.

I am a political person, and I am proud that I have not changed my way of thinking. I have been lucky that it has been possible for me to stick to my ideals all the way. After the Berlin Wall fell, I was questioned by my employer about my work for Stasi and told the truth. The conclusion was that I could continue in my job but with an enormously reduced period of employment at the railways which also means a reduced salary for many years. When I had my ten years’ jubilee in 2000, my colleagues wondered about the short time. I told them the truth, but nevertheless they elected me to the works council some years later.

I find it important to be truthful. It is also important to me to be a stubborn bull’s head or “Ossenkopp” in Low German from Mecklenburg. When we have been on a tour and see the fields of Mecklenburg again, I know that I am back home.

My main hopes for the future are a long healthy life with Marita and peace on earth.

On our way out Klaus with a smile shows us a Donald Trump cap made in Vietnam, bought as a souvenir in the US, before Trump was elected. 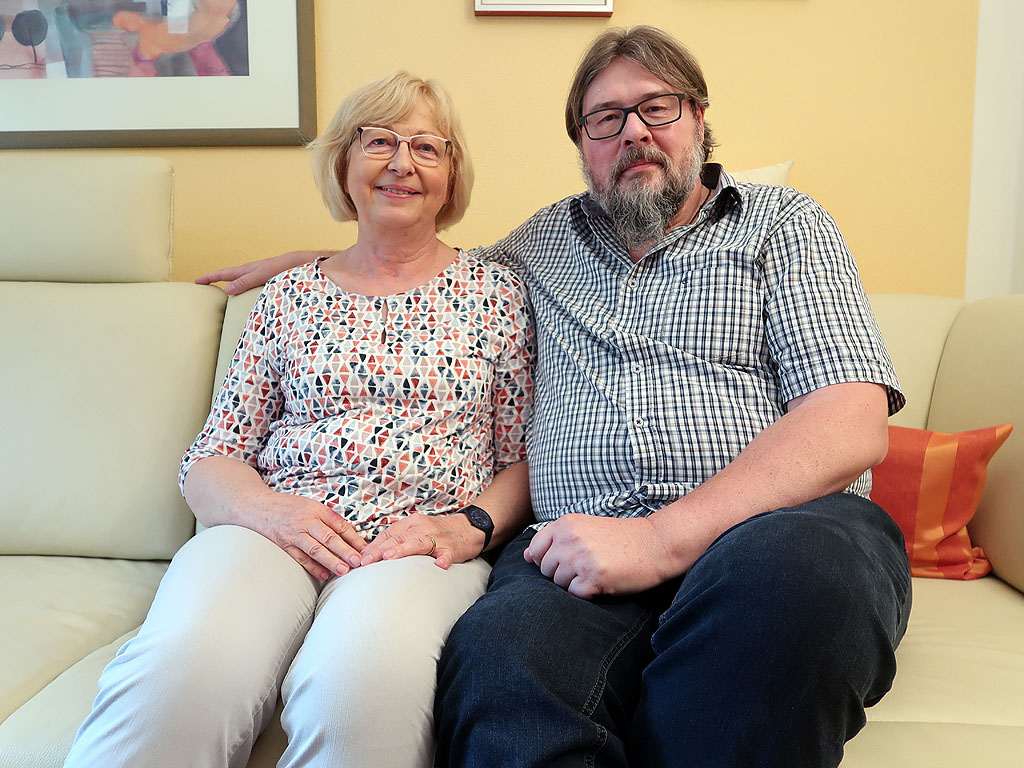 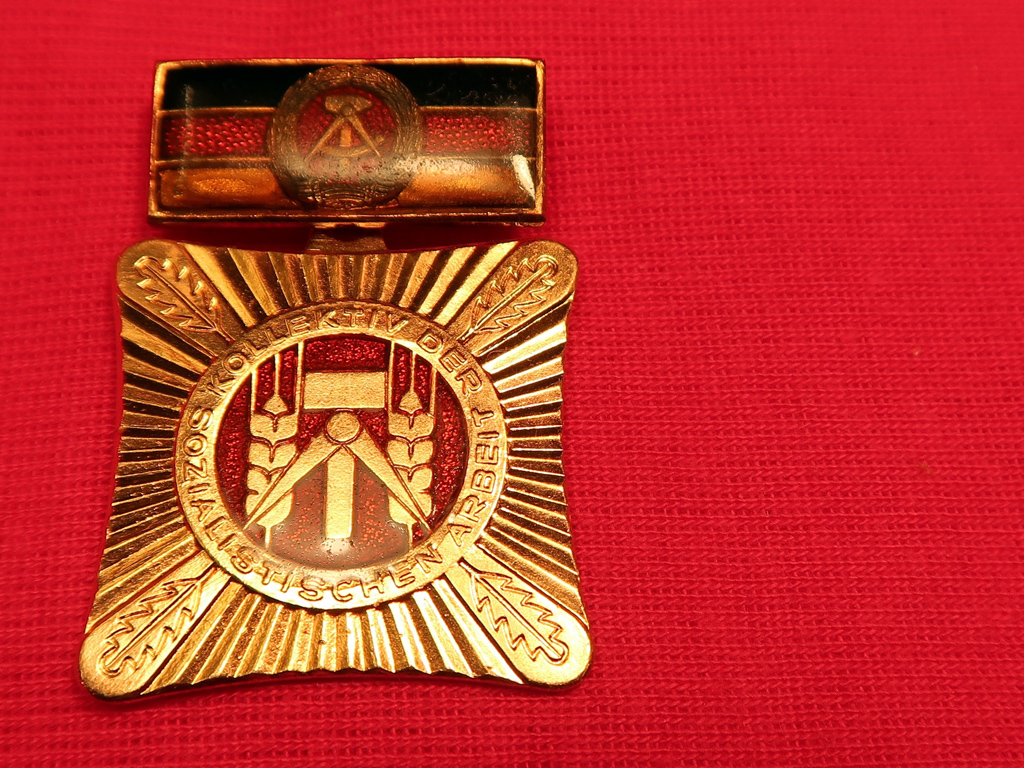 After the interview Klaus awarded us this DDR-medal.