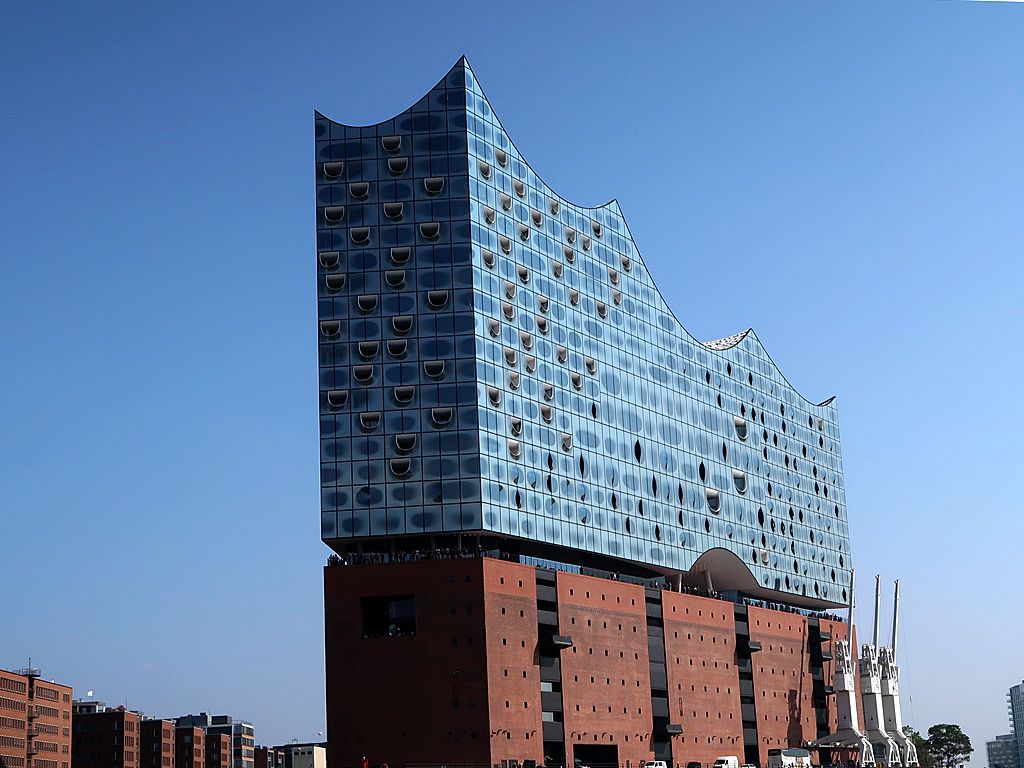 I hope my Life Can Continue as it is

Jan and his girlfriend Julia were our neighbours at a campsite in Berlin. Jan works with wind energy and one of his hobbies is kitesurfing. We had this conversation in their attractive Hamburg apartment. 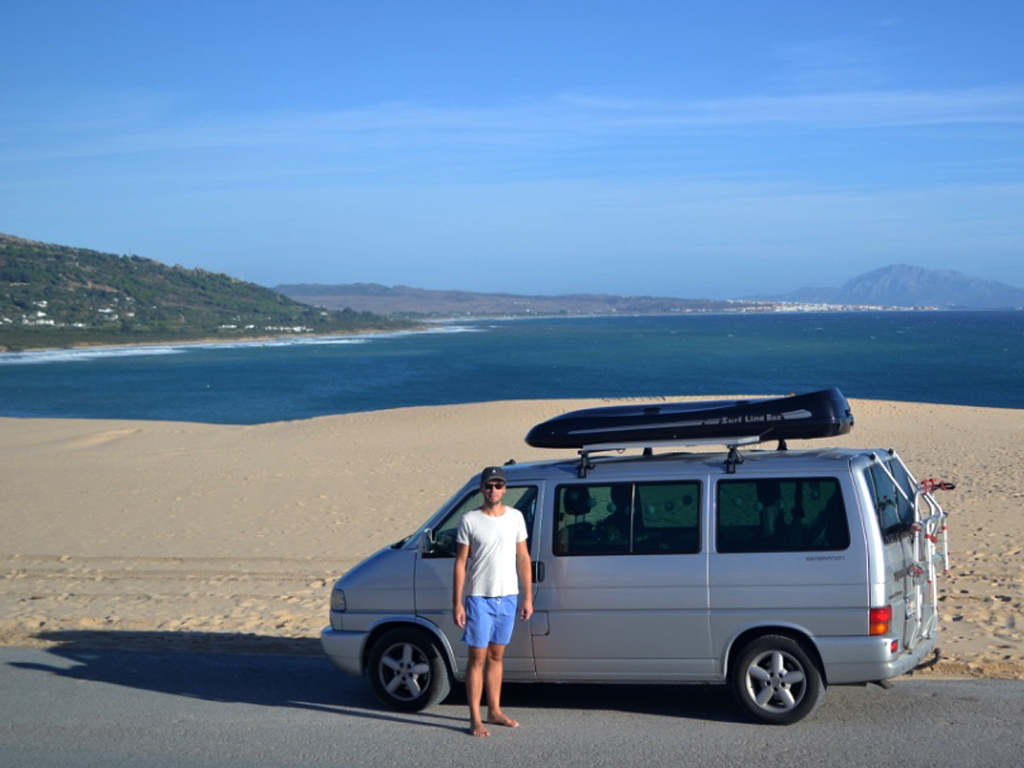 I work on the transition to renewable energy

On a normal working day, my girlfriend and I get up and have breakfast together. We usually eat some fruit. Then I take my bike along the Alster to the city centre, where I work in the strategy department of a wind energy company. Next month I will move to a more operational job as a product cost manager, and I look forward to that. Julia is a doctor and has shifting working hours, mine are flexible, so we can spend our mornings together.

My work is mostly making analysis, presentations and decision proposals. On the very highest level I work on the transition to renewable energy, in which Germany is a leading player. I find this important and meaningful. It is something I am proud of, and it is a part of my identity. The market is changing rapidly, and the industry is not, what it was three years ago.

It is also nice that I am part of a great and young team. My colleagues have changed over the years, they go to new places or other parts of the company, which has made my network grow. I usually have lunch with colleagues, family or friends. We go to a restaurant or to the canteen. I work till five or six in the afternoon and sometimes later. I like to leave work at different times so that I have the chance to meet interesting people and talk with them.

Sometimes I go to meetings or conferences. I may also take trips to Denmark or Spain. Since we merged with a big Spanish player we are not just a German and Danish company. It is a great opportunity to experience a merger like that. More than 20.000 people work with the wind energy company now, it is a world-wide organisation. At the end of this month there will be a large international conference in Hamburg, which is called the capital of wind energy industry.

When I come home I try to do sports at least two times a week, Julia often joins me to the fitness studio, we also go jogging together. These activities are just to keep us fit and able to do our fun sports. We have lately taken up kitesurfing.

Sometimes we go out to meet friends and have dinner with them at a restaurant in the evening and during weekends. I like to take advantage of city life. We also go to the market to buy good vegetables and fruit, we enjoy cooking and having healthy food. Julia does the planning, and I help execute the plans. Some nights we simply enjoy sitting in front of our computers and do research for our jobs or hobbies.

We love to travel, and since we bought our camper we plan our holidays so that we can use it. We often find spots where we can go kitesurfing. Last year we went on holiday to Sardinia for kite lessons. Now we like to be independent, and go where we want without thinking about hotels and reservations. This year we have been in Denmark in our van at a time when the weather was far too nice for kitesurfing. But we will surely come back.

We often take two kind of holidays either visiting a city for a few days or going to the countryside to have fresh air. We have also travelled in Asian countries and enjoyed the countryside there very much. Country life has been important to us since we grew up in Friesland.

I have had a passion for agriculture and tractors since my early teens. Farming is an important hobby of mine, two years ago I bought a big tractor, and my father and I built a shed for it. One of my friends has bought a small farm, and I like to help him. When he asks me to give a hand harvesting grass, I drop what I am doing and go.

Everything works pretty good now. I really hope that my life can continue as it is. I have been lucky, and I have a fine life. I try to see the good things.

It was so nice at home

When I was two or three years old, my parents moved from a village to a very remote place in Friesland. I had a lot of space and could do what I wanted. I built treehouses and had a garden. My father is a teacher, and he spent a couple of years restoring the old farmhouse. I went to kindergarten when I was four, but didn’t like it in the beginning, because it was so nice at home. After some time, I found out that it was perhaps not so bad out there, and started enjoying it. I still have friends from my early days at school, I use to build few but deep relationships.

After 6th grade I was sent to high school. This meant that I had to take the trip to the next city. I had a good time with my friends, but studying was not that much fun for me back then. When I look back now, I could probably have made it easier for myself. As you get experience, you get a different focus.

At that time, we started having parties, and I had my first girlfriend. I also got a little motorbike that I still have. This gave freedom. I got my license for a tractor when I was 16, and for a car when I was 18. When I had the licence for the tractor, I started working as an agricultural contractor for big farmers in eastern Germany, it was exhausting work twelve hours a day. But I did the same thing to make money while I was a student.

I passed the final exam of gymnasium, when I was 19, it was a hard test. At that time, I didn’t want to serve as a soldier or do civil service. I might have done this today just to see what it is like. So, I had to decide what to do next. I liked technology, and decided to become an industrial engineer and combine it with business administration and finances. Doing this I still had the opportunity to change studies to become a teacher like my father in the end.

I finished my bachelor fast, because after that, I could choose more interesting subjects. I decided to study abroad and go to Canada for one summer at a very international university in a small city near Vancouver. I also wanted to improve my English and met many nice people to practice. I bought an old Cadillac and took a camping trip in Canada and in the US with my girlfriend, who came to visit me. At that time, I got the feeling that I should see more of the world.

After studying abroad, I had an internship for six months at Volkswagen in Wolfsburg. It was a tough time, but my brother happened to be in the city, so we could live together. I finished my education, when I was 25, and I am 28 now. I have had my present job for three years.

Friends and family are important to me. I have an older sister and brother. It is my privilege to be the youngest one. My grandparents are also from Friesland. My family has a long history there, and I like that. All of my grandparents have lived in my parents’ home for some time. I enjoyed it and could do the same with my parents, if they need it.

Julia and I met at our last day of high school. Since then we have been a steady couple and have grown together. We visited each other in the weekends during our studies in Bremen and Hamburg. I moved to Hamburg for the last two of years of my studies. Our relationship from an early age has given stability, and we do things together that you only do as a couple. We are not married yet, but still have plenty of time.

Fundamentally I am an optimist

Being German is not important to me, when I am in Germany. But when I go to the US for instance it becomes important because it is easier to enter the country. Germans are known for good quality and good work. I like the fact that I am a northern German. But most of all I see myself as a European and find it important to be able to go everywhere freely. So, I don’t like the stupid border control between Germany and Denmark.

I don’t see the need for borders, unless there are completely different understandings and values. For instance, if Turkey wants to become a part of Europe, it should comply with European rules and democracy. The crisis of migration is not really noticeable to me, as Hamburg is already quite multicultural

My first hope for the future is that everything can continue as it is for a while. But I do have some small and some bigger goals. I want to be a better kitesurfer. I also want to improve my career and do well in the new job. I could see myself as a team leader sometime in the future. Someday I might become an entrepreneur. I try to be open for new opportunities.

It is also important to found a family, Julia and I want to get our own house and get children. It could be in Hamburg or some place in the countryside with space for my farming hobby. We could also buy a house near the beach in Portugal or in Denmark. We could perhaps do it with some other couples and help each other take care of the children.

This far my life has not been much influenced by politics. I don’t fear neither Brexit nor Donald Trump. I think life and trade will go on in spite of political changes.

My father’s parents were simple people, but their children got an education, and now we are at a top. I think the only fear in my generation is that something could happen, which would stop the good development. If we get ill, or the economy has a downturn.

Fundamentally I am an optimist. 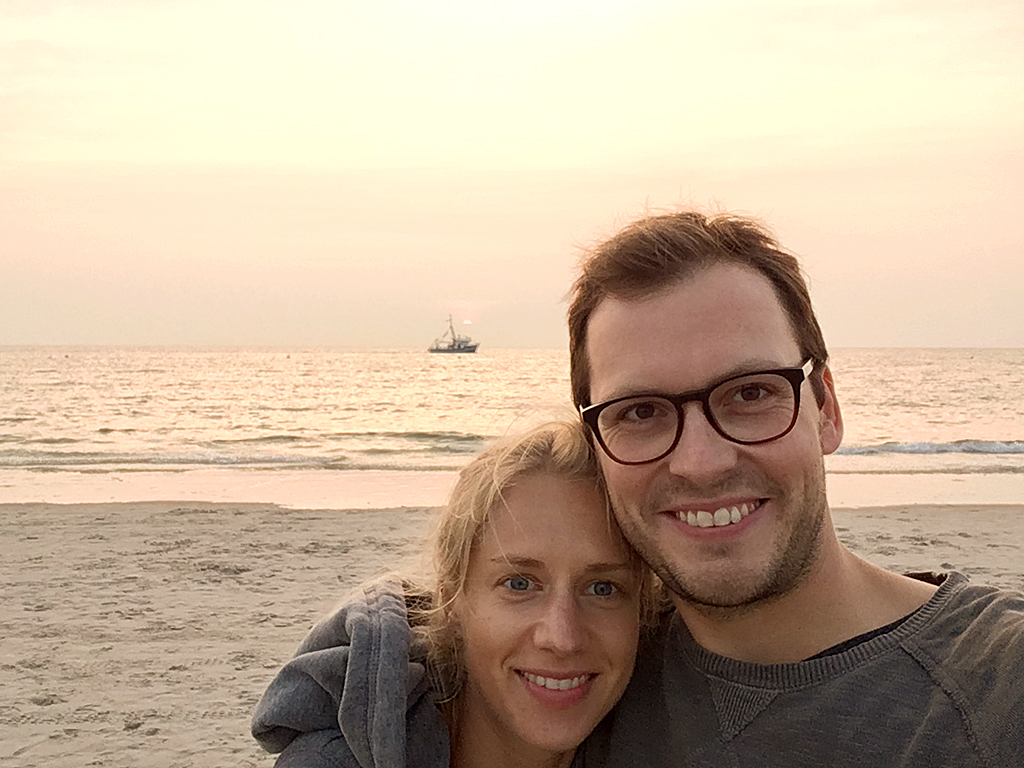 Portraits by Jan and Julia.