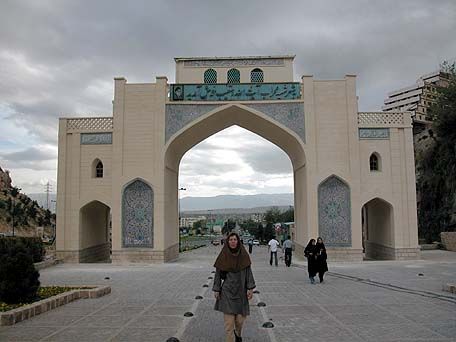 We arrived in Shiraz when we had travelled a couple of weeks in Iran. The city has a burial tomb in the shape of a gate. In a room at the top of the gate is a holy Qur'an that you may pass underneath to have a lucky journey.

We passed the gate thinking that if you want to be able to tell something from a journey you must follow local traditions and keep a distance, so that you can see them. But already while passing the gate, we had our doubts whether we actually did follow a local tradition. We had noticed that surprisingly many Iranians did not stick to the Muslim traditions of the country.

Iran is a country with many contrasts. There is long distance in time and space between the wealthy, modern, secularised middle-class of northern Tehran over Qom's learned Muslims to the poor nomads of the South, who follow the trails of their forefathers.The distance between the barren deserts of the East to the green mountains of the Northwest is equally long.

When you think you have discovered a truth about the country it is contradicted by the next things you experience. - Iran has many veils in a metaphorical as well as in a literal sense. 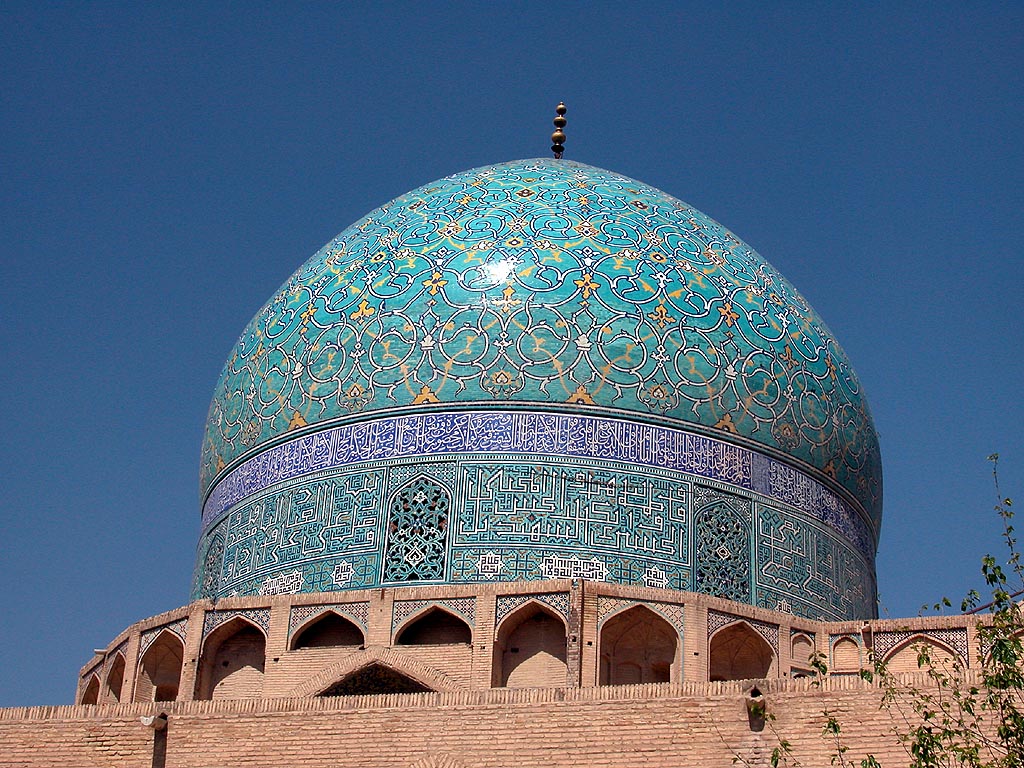 We flew to Tehran and bought a tailored tour with a guide and driver to the historic cities of the Southwest. Our plan was to travel on our own, but Iranian friends advised us not to do so. We explored northern Iran helped by new Iranian friends.

In one month we drove almost 5000 kilometres by car and by bus, thus we saw one third of the vast country. The roads are good and petrol is cheap, but seen by European eyes there are no traffic rules. We saw accidents almost every day, but fortunately we were not involved in any of them.

On our way we saw the rich museums and polluting traffic of Tehran. Qom's Muslim piety and sanctuaries. Kashan's homes in beautiful gardens. Ifahan's impressive squares and mosques. Shira's poets graves, that represent living literary traditions. Persepolis' ruins of ancient Persian civilisation. Kerman's production of beautiful hand made carpets. Yadz's well proportioned old houses and Zoroastrian fire temples. And many inns along the Silk Road, that used to give shelter to travellers and their camels.

We spent the last week of our stay in the Northwest based in Rasht, which is the capital of the Gilan Province. We visited Masuleh, that clings to a sunny hillside like swallows' nests. We bathed in the warm, sulphurous springs of Ardabil near the Azerbaijani border. We experienced relaxed holiday towns along the shore of the Caspian Sea. And enjoyed the view of villages with rice and tea fields from the mountaintops.

The clear lines, beautiful carpets and colourful tiles of the great representative buildings was impressive. But homes on a human scale in peaceful gardens were more in line with our Danish aesthetics.

Traditional Persian homes are simple and functional. We visited several private houses that apart from a television and perhaps a computer were mainly furnished with carpets. During meals a cloth was unfolded on the floor, and in the night bedding was taken out of a cupboard.

Our journey gave us an impression of a country with inviting people and breathtaking natural and cultural assets, which is still only visited by few tourists.

All over Iran the cultural heritage was either under restoration or had recently been restored. This may be due to reflection over former practises, several people could tell, that after the Islamic Revolution the ruins of Persepolis were used as building materials.

Our guide on the tour to the south had worked with hotels and restaurants all over Iran, and he gave us a very competent introduction to Iranian food culture.

Iranian dishes are simple and not strongly spiced. They are made of good, tasty ecological raw materials. Fruit and vegetables grown without use of pesticides and meat from sheep and cows that guarded by a shepherd have found their nourishment in mountains or deserts with limited vegetation.

We will remember grilled chicken, lamb and cow served with rice and fresh salads. Delicious vegetable stews. Rich sauce made of ground walnuts. Fresh and nicely smelling thin bread, that is wrapped around meat, cheese etc. Thick soup with meat and vegetables, that is traditional Iranian food for people with hard physical work. Tea sipped from small glasses through lumps of sugar. Many kinds of roasted nuts, fresh and dried fruits and sweet cakes in regional variations bought by the pound.

The pleasure is even greater when the meal is enjoyed in one of the pleasant old bath houses that are now used for restaurants. And the peak of pleasure is reached, when the water pipe is lit and the smell of apple tobacco spreads in the room accompanied by traditional Iranian music. 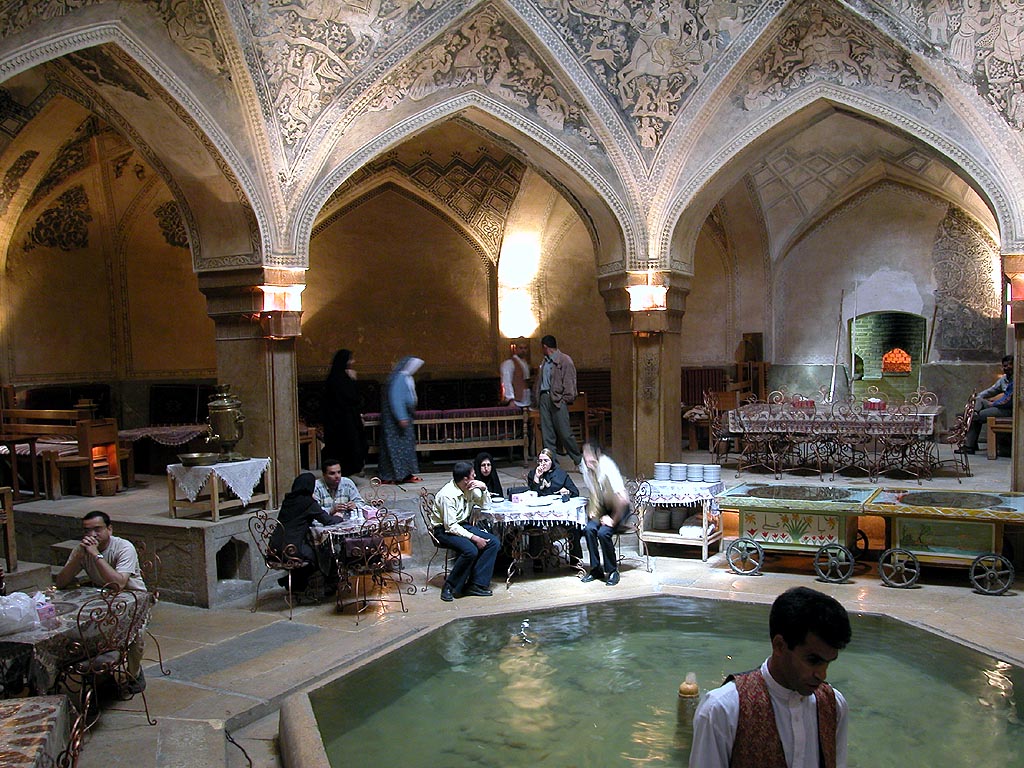 The women of Iran

On our journey we have met couples with equal relations, where both husband and wife work in and outside the home. We have also met couples with the division of labour that was common in European countries until the 1960s. We have spoken with young women, who with regret had to give up dreams of studying abroad, "this can't be done in our culture." We have seen men on outings with the four wives that are allowed by Islam, if you can support them. And we have heard about so-called honour killings.

All women over the age of nine must dress in a hijab, which is supposed to hide everything that may tempt weak men. In the cities it is however obvious that young women challenge the rules. The scarf is pushed far back and often rearranged revealing their shiny black hair. The long, loose chador is discarded in favour of short, tight coats in light colours. Makeup, perfume and sometimes a cigarette underline the impression of modernity.

All Iranian women are wrapped, but some of them choose a cellophane wrapper, which leaves little to the imagination, when they go for a walk to exchange phone numbers with hopeful young men. Many of them have fights with their parents and other adults about just how short and tight their clothes should be, and how far they can go in their interest for the other sex before marriage.

Before leaving Denmark Hanne had tried to find clothes that would match the Iranian dress code. Her overcoat and baggy trousers size XXL bought in a Danish supermarket led to many reactions. Some Iranian women considered her a trendsetter and asked where they could buy similar clothes. Others considered her strict obedience to rules too old fashioned or too hot and immediately gave her light and transparent scarves.

Lars' camera also led to varying reactions from potential female models. From women, who asked to have their picture taken together with us, to women, that crossed to the other pavement, before they came within reach of the camera.

If the clothes and roles of Iranian women mirror the spirit of the times, it is debated these years. 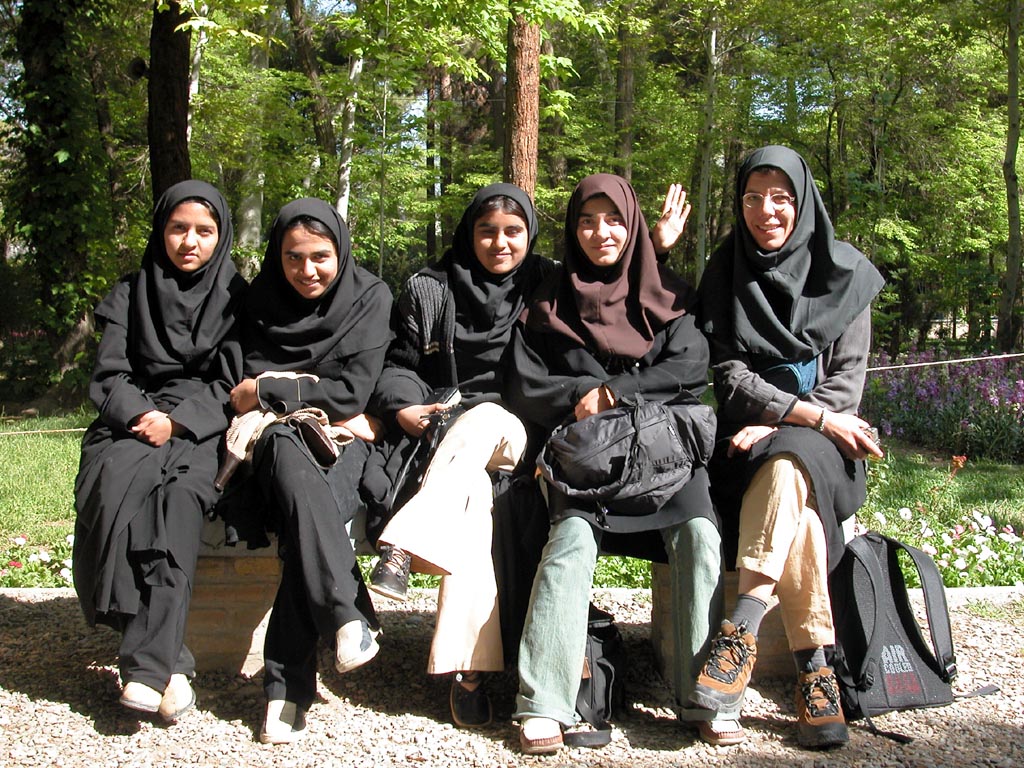 The Islamic revolution of 1979 was a rebellion against the shahs' attempts to make Iran a modern western nation. In a popular poll the Iranians decided to make the country the first Islamic Republic in the world.

We have seen many likeable aspects of Islamic culture in Iran. The architecture with its clean lines and tiles in bright colours. The hospitality that made people open their homes to us. The absence of intrusive sexual signals in public. No intoxicated people in the streets. And sincerely believing Muslims, who get up at five to pray.

But we have also experienced, that the radical attempt to unite moral and politics by the Islamic Revolution has led to a situation where moral standards is a good thing and double standards often more appropriate. Alcohol is forbidden but can be bought all over the country. Drugs are banned but smuggled in from Afghanistan. Prostitution is illegal but widespread among other reasons because it is difficult for young women to find jobs. Corruption is common.

Many Iranians apparently conform to Islamic rules in public, while they live an internationally oriented and secularised private life. Curtains are tightly drawn in Iranian homes. Dressed in relaxed clothes they enjoy forbidden pleasures like alcohol and dance, while the television is tuned to CNN, Eurosport and Iranian stations in Los Angeles. Many Iranians have friends or relatives abroad, and some have considered leaving the country themselves.

We did not start political discussions, but often met people, who distanced themselves from the regime. At the one hand people in the street shouting things like, "Iran is a bad country and The US is a good country," accompanied by a gesture towards the portraits of the religious leaders Khomeini and Khameini. At the other hand serious deliberations on president Khatami's good but regrettably hopeless intentions of reforming Iranian society.

Political thoughts would however often end with a shrug of the shoulders that for some lead to individual visions about immigrating. In the words of a young student dreaming about a life in Canada: "I have no hopes for my country, but great hopes for my own life."

You may get the impression that many Iranians' passive protest against the Islamic Revolution has led to exactly that secularisation and modernisation of Iranian people that the shahs strove for. 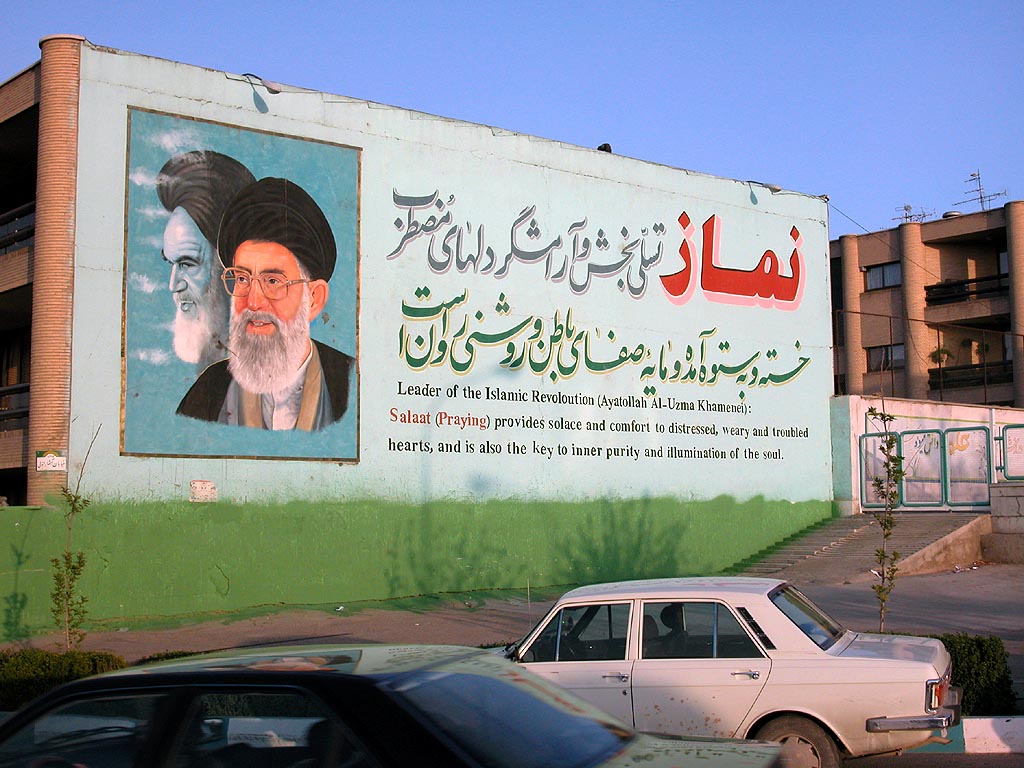 On our way to the airport in Copenhagen we got some phone numbers from an Iranian friend in Denmark. His name turned out to be the magic word that opened Iran to us. We called people, whom we didn't know, and were immediately invited to take over their bedroom for a week while they showed us the sights of the region.

In the beginning we found it difficult to accept offers like that, but we learnt that hospitality and politeness are important features of Iranian culture. It is not only a joke from guidebooks that two Iranians may have trouble leaving a room, because none of them wants to be the first person to go.

Being visitors in Iran we got the feeling that everybody in the country had agreed that we should have good experiences. We were stopped by people in the streets, who asked where we came from. After having announced their sympathy for various Danish soccer heroes they welcomed us in Iran. If we looked a little helpless three Iranians immediately offered their help. When Lars thought that he was arrested a kind policeman wanted to help him cross the street, so that he could get a better photographic angle of a statue.

Iranian hospitality works wonders, and not only for wealthy tourists but also for refugees from among other countries Afghanistan and Iraq. It is so great, that Iran probably is the country in the world housing most refugees.

This is a memento to the debates about immigration and integration in many other countries. - We had to widen our limited Danish scope in order to receive the unlimited hospitality of the Iranians. 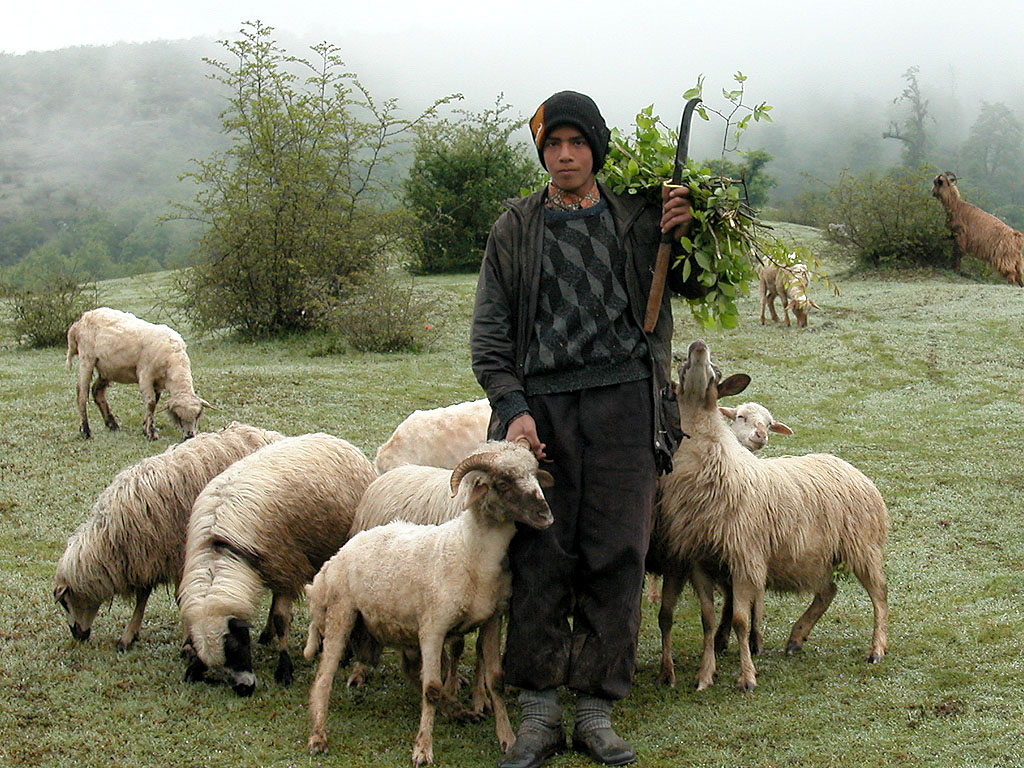 While we were in Isfahan the Museum of Contemporary Art exhibited works of a photographer expressing great love of the architecture, landscapes and people of Iran. The museum also had an exhibition of small ceramic works by an artist, who showed birds, fish and flowers in cages.

This duality mirrors our impression of Iran. As visitors, who have been treated well, we can only hope, that the Iranians themselves will be able to make political and economic reforms, that can maintain the cultural traditions of Iran and at the same time introduce the freedom that many modern Iranians long for.

Whether it was due to the Qur'an above the gate in Shiraz is hard to know, but we certainly did have luck on our journey in Iran. 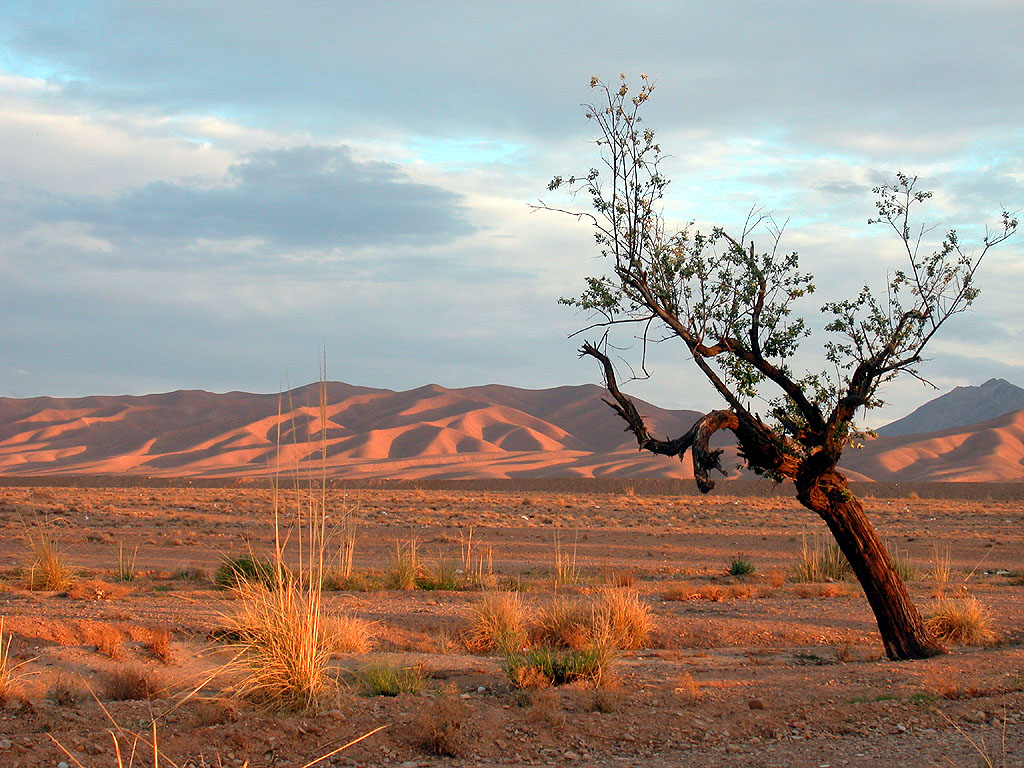